You Gotta Have Faith

We were driving home from school after finishing a busy week recently, tired from a long day, excited about getting into PJ’s and having a chilled evening. And then she asked a question, a question that I knew would one day come as a result of choosing a private, all-girls, faith-based school: “Mommy, are we Christians?”.

Religion is one of those topics you are told to steer clear from at dinner parties. They should also warn you that having religious-based debates with an opinionated little girl is no walk in the park either!!

We first discussed what faith Bella would be raised in when she was a few weeks old. Neither of us wanted to baptize her, so we opted to rather do a Naming Ceremony (for lack of a better term). Deciding to write our own ceremony, we combined elements of both our childhood faiths, using both Christian and Jewish prayers, as well as Gaelic blessings and our own words. We knew we wanted to send Bella to a private school, which would mean she would be in a predominantly Christian environment, but as he is agnostic and I am more of a ‘hippie’, we also knew that this aspect of her life would have to predominantly be taught at home.

Bella first started questioning religion when she was 4. We sent her to a new school for Grade 00 and there was quite a big focus on Christianity. Having never read the Bible to her, or taken her to a Sunday Church service, she came home one day asking ‘who is Jesus and why does he love me so much?’ She told me her teacher had taught them about God’s son and that he lived in the sky. And then began our first big debate on spirituality. Me, still unsure of exactly what faith means to me, and my young daughter, suddenly very worried that a man in the sky is always watching us. I explained to her that Mommy and Daddy don’t pray to Jesus, but that she is free to make this choice on her own. She told me with tears running down her little cheeks that I was being very unkind to Jesus. And then I got out a book from my library.

I don’t remember which book it was, that wasn’t important. I just looked for one that would illustrate my point. I held it up to her and told her the book was green. She disagreed, saying it was red. I argued with her and let her get a little angry, her telling me that I was wrong and that the book was clearly red, and me counteracting her claims with the belief that the book was green. Eventually when she was about to throw a full-on tantrum, I turned the book over. Sure enough, the side of the book I was looking at was green, and the side I had shown her was red. And that, I explained to her, is how spirituality works. Some people see faith from one perspective, and some see it from another. I don’t mind what perspective of faith or spirituality she has, as long as she lives by the ideals of what it is to be a good human being – kind, loyal, empathetic and accepting of all. 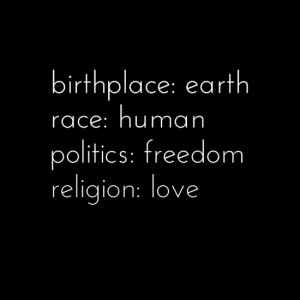 So when she asked me ‘Mommy, are we Christians?’, I reminded her of that conversation from last year. Then we spoke about Jesus again. And the Universe, the Angels and Mother Earth that Mommy believes in, and the Ancient Greek Gods that Daddy is interested in. I told her that everyone believes in different things, they have different ways of celebrating their beliefs, different ways of praying, even different ideas of what or who God is. But fundamentally these ideals all strive to teach us how to live and how to be good and kind. I told her that this will be a life-long discussion, one she should explore and make sure she understands all sides of the story before coming to a decision, but that no matter what she chooses to believe in, I will support her 100%, even if it’s different to me. Because being different okay, it is the same as ‘you do you boo’ (which I wrote about here).

As parents, we know we will mess up. There are bound to be areas where we try our best, but fail our children anyway. And maybe not centering Bella into one faith will be something that many will criticize. But for me, teaching her acceptance of all faiths, the belief that we are all different but that difference is what makes us so great, and that this is a journey only she can embark on for herself, will better serve her in this world of diversity in which we find ourselves.

Maybe she’ll want to explore Christianity and I’ll have to drive her to Church. Maybe she’ll want to have a Bat mitzvah and I’ll have to get her Hebrew lessons. Maybe she’ll renounce all faiths and believe in nothing that she can’t physically see. I don’t know what my daughter’s future will teach her about the Universe. I only hope that I can give her the skills to make decisions on her own, to be mindful of others and to be informed before blindly choosing a path. I hope that she pushes me to the utmost end of my own boundaries, even forcing me to reevaluate my own beliefs so that one day, I have given her enough that I can then in turn learn from my daughter.